Sam was the awesome-est guy you would have ever met. He was kind, friendly, generous, and always had a smile and encouraging word for everyone he met. He had this giant, toothy grin, that spread from ear-to-ear, and for a while was highlighted by his silver sparkling braces. His nose would wrinkle, and he would push his rimmed glasses up as his face lit up.

I met Sam when I was in first grade, and he was 13. Our families went to church together, and were good friends. Between numerous family birthday parties, various moves across and around town, and many summer game nights, there were many happy memories with Sam. He and his siblings came over to help my mother clean and organize our garage. In the middle of that, he built us kids a butterfly net with a mesh onion bag and a wire coat hanger. 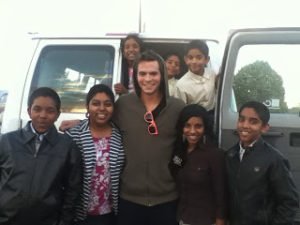 He helped build some raised beds for our family garden. He played the trombone in our church orchestra and would frequently open the valve to release all the spit from in the tubes, which was incredibly gross. He had a quick wit, a big heart, and a mechanical mind.

He went away to college in Florida, to study mechanical engineering. He came back tan, with long beach-like hair. Gone were the braces and the glasses.

Then he graduated. While looking for a job, he ended up back in Cleveland. That summer, my family sold our house, moved to temporary housing, and then moved into our current house. Sam was there through all the moves. Never complaining as he helped move countless boxes in the hot sun. In between, he could always be counted on to enjoy an ice cream sandwich, or tussle with his dog. He loved food.

My favorite memories are the many times he was over at our house and how much food he ate. He loved my pulled pork and I still have the mental picture of him hanging over the breakfast bar yapping away while I was shredding the pork. He once refilled his plate seven times for dinner. He’d throw all this random food into a naan, and wrap it up like a burrito. He was super active and high energy. Always active and raring to go.  My mother called him son and he was truly a part of my family.

He complained of some arm pain during the summer. We teased that he was working too hard and chalked it up to a sprain. Then Sam got an engineering job in Chicago.  We were sad to see him go, but thrilled for this chance.

One night, after the mid-week prayer service, his dad solemnly went to the podium and shared how Sam was diagnosed with Ewing’s Sarcoma. Time seemed to stand still. Sam ate so healthy and was so active. He was so full of life it didn’t seem real that he would have cancer. My dad, ever the researcher, did some studying the next day and we learned the dire truth about the Ewing’s odds. But Sam was a trooper. He completed his treatment. They kept him on at his work and modified his role so he could work from home making drawings. We prayed for him, and had everyone in church sign a long banner with well wishes for him.

Christmas came, and he was done with treatment and cancer free! His parents threw a huge holiday open house, for everyone to come celebrate Sam’s life. It was at that party, that I realized I was really sick. A year to-the-date of his diagnosis, I had my own. Sam reached out, and was encouraging and supportive through my own cancer, until I too could celebrate ending treatments. My family went to Chicago that summer, and stayed with him. He had long, curly hair, in stark contrast to my wispy strands. And he got a girlfriend.

2013 found him in the hospital for a bone marrow transplant. I teased him that he slept away his transplant, because he took a dose of Benadryl and conked out. He told me to do the same. He got out of the hospital in a record 10 days. Two weeks and 2 miles down the road, I began my own transplant journey, armed with his wisdom and encouragement. As hard as I tried to beat his record time, my hospital stay was way longer than his. But then we were both home and recovering. He got married and was living life in Chicago. I spent some time in the ICU that fall, but eventually made it to college.

There were the routine abnormal sickness and all and in October, he got really sick. Swirls of the cancer is back filled the air. All his family flew out to Chicago. His siblings came back to Cleveland. I assumed that was because he was on the mends, and his parents were finalizing the details before he returned home.

I’ll never forget that day in the music building at the University of Akron. Christina (his youngest sister and my best friend) was sitting on the end of her longboard, sliding back and forth, while I was perched on a couch, prior to my violin lesson. We were talking about random things, and the college work she was going to make-up. I asked about Sam. She slid faster. Then said- you didn’t hear- we left because he wasn’t getting better. He died this morning.

At the hospital they always ask you to rate your pain from 0-10. I’ve been in some crazy pain, but never rated it past a 9.  Someone asked me why and I said a 10 was for something so absolutely unbearable nothing on earth could help. That moment was my 10. I didn’t cry then, but I’m crying as I write this now.

My heart and stomach did a weird twisty thing, and I felt hollow, like my guts had been sucked out. My brain was trying to scream with pain, but I couldn’t breathe. I felt numb and so tired. Sam was gone.

Through time, I’ve come to focus on the happy memories with Sam. I desperately wish he was here, and there is so much I would love to pick his brain about. His birthday is two days before my transplant birthday, and every year as I celebrate one more undeserved year of life, I remember it’s one more birthday he’s celebrating in Heaven. Sam is a huge part of the reason I write.

It’s crazy hard to relive my most painful years, and immensely emotional to write and share it with you all. But if Sam were still here, I 100% guarantee you he would be in this role. He would write to share what he learned, and how he dealt with life. He would reach out to those in the midst of treatment and offer what hope and encouragement he could.

He would be involved in fundraising and supporting cancer orgs. Sam isn’t here. But I still am. And every day, when I don’t think I can go on, I remember his courageous spirit. I remember that I’m living for me, but also for Sam and the many others who cancer has taken too soon and too young.

Miss you always and forever Sam.