When I was 20, I was playing the role of Nerissa in “Merchant of Venice,” when I got a sinus infection. Rehearsals were ramping up, so I went to the doctor on my college campus. It turned out that I also had thyroid cancer—her routine lymph node check revealed the .25 cm tumor. It was the summer between my junior and senior year of college. I withdrew from my classes—Business Math and Greek Satire—and moved home with my family to undergo treatments.

At that time, the recommendation was a total thyroidectomy and a round of radioactive iodine. I had the thyroidectomy, drank the radiation, stayed distanced from my family, and got the scar—plus a bonus one from the drainage tube. A year later, I had a plastic surgery scar revision, because my incision scar developed a thick rope keloid. I finished my senior year of college in the fog of healing and adjusting to thyroid medication dosages, with a body that had bloated and gained weight through the process of becoming hypothyroid to prepare for the radiation treatment. I felt like my life as I knew it had changed forever. In some ways, it had. But it would take me 20 more years to figure out the ways it hadn’t—the ways it couldn’t.

Over the next 10 years, I got married, got a few more degrees, became a college professor, had a recurrence and another radiation treatment, this time with a dosage large enough to require isolation in the hospital until a Geiger counter registered that I was emitting a low enough amount of radiation to be safe to leave the hospital. I had to be careful—a doctor’s note for the airport, in case I set off alarms with my radioactive body, trying to keep my dog from licking my radioactive sweat, not kissing my husband. When you drink radiation, they bring out a set of metal canisters that nestle like Russian dolls, to conceal the smallest one, with the liquid radiation they learned about through the Chernobyl tragedy. They stand back. Someone reaches carefully forward to pop a plastic sippy straw in the clear liquid. They tell you to drink it—be careful to suck it all up. You’re thinking—this CAN’T be a good idea. You’re thinking—I’m forever poisoning my body. You imagine your mouth like the mouth of a river to a lake that contains your whole future and the origins of your family. You’re poisoning it, so you can live. The thought of my children forming in that place terrified me. They said wait a year. I waited 4. I waited too long.

I was 29 when we realized that I just wasn’t getting pregnant. Maybe it was my age. Maybe it was my hormonal deviations. Maybe it was fate. Maybe it was nothing at all. But I really wanted children—I always did. I had pictured them, named them. Felt their hands in mine. We got certified to adopt. I met with an IVF doctor. It all worked. On the way home with my new adopted baby to bring her into my home, I got a call from the doctor—I was pregnant. Two years later, I got pregnant again from an embryo from the same initial IVF cycle. A year later, my marriage to my high school sweetheart and husband of 15 years would end. A year later, I would decide on my own not to destroy the remaining embryos or give them to science or put them into a pool to be “adopted.” As a divorced mother of 3 kids under 4, I would get pregnant with twins—with my kids’ siblings, frozen and waiting. I would twist my body twice a day to give myself shots. Drive myself to doctor’s appointments with the driver’s seat pushed back all the way to accommodate the three of us. I felt elated and devastated and hopeful and terrified and strong and intensely vulnerable.

It’s been 22 years since I first got my diagnosis. Living with the after-effects of cancer early in adulthood has been an incredible education in the boundaries life gives us and the ways we accept them. Or we don’t. I’m still a college professor—writing, researching, teaching. That sedentary career made me feel like I was leaving my body behind, so I focused on my fitness, after having had the twins. It’s been two years now, and I’m in the best health of my life. In the last 6 months, I started a fitness business, competed as a fitness model, and began training as a skydiver, with a body that’s gone through hell. A body that’s been cut, excised, poisoned, healed, cut again, poked, deprived, stretched, shared, loved, left, found—a body that’s grown 4 children and fed them and welcomed an adopted fifth, all over the last 7 years. My life now is full of joy and balance–a ceramics business, fitness business, modeling, skydiving, writing, publishing, teaching, and laughing with my kids. 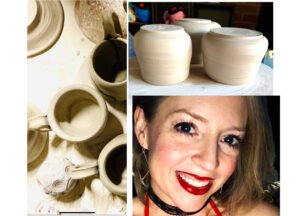 Though the recent lockdowns and quarantines have taxed us all, my kids have watched me more. They’ve watched me write, and struggle, and work out, and grow, and do scary things, and cry, and laugh at myself. Laugh at the fear and walls we build that separate us from each other and who we could be. Cancer taught me that—taught me all of that. I’ll be happy and sad again—I’ll find love again and maybe lose it again (or maybe discover that it’s all around us, all the time)—I’ll feel courageous and terrified—I’ll surprise myself with the heights of my strength and the depths of my weakness. But at my core, I’m the girl who walked into the room surrounded by people in full radiation gear and smiled.