I was in the middle of a singing lesson during my senior year of high school when I started having trouble gathering enough breath to hit the notes correctly. “It’s probably just the winter season cold and I’m still learning how to use my voice,” I thought. Little did I know that my endeavors and drive for music would be what saved my life. And not for the first time either.

I was officially diagnosed with T-Cell lymphoblastic lymphoma on New Years Eve of 2015. The doctors told me it was “a mass the size of an orange,” and that my plans to attend college the next year and travel the country auditioning for musical theater and acting programs would have to be put on hold. These first changes and setbacks were only the beginning of my various “new normals.” Now, with my diagnosis story out of the way I want to take things in a different direction.

The part of my whole “cancer experience” that I was not expecting to be so hard and so formidably strange was the transition back to normal life. I feel that this is a part of cancer that not a whole lot of people hear about, and it is something that is incredibly hard for non-survivors to understand. I expected to be done with the unrelenting, painful slog and to just be able to move on with my life very quickly, but the lingering physical and mental health problems I was left with from my treatment made that very difficult.

I went into my first year of college at Wright State after a gap year and was still finishing up my treatment. So, with one of the biggest transitions of my life, I was still plagued by treatment and its debilitating symptoms. It made it hard for me to completely relate to everyone else’s problems moving into college. For me, trying to bring myself back to normal health was my top priority, even above the classes for my acting degree that are a driving passion in my life. This inability to relate my struggles to others started a large process of loneliness that still bothers me to this day sometimes. It is a problem that is difficult to express without sounding as if I feel I “know better” than other people. I hate comparing problems because I am a firm believer that everyone’s problems are their own as well as meaningful, so I have always found it extremely difficult to discuss or express my struggles completely. That is where music has come to save my life again.

Being an acting major can be an incredibly exhausting choice. There is so much drama (no pun intended) and physical activity that it can leave me very drained. Specifically, I struggle with the worst lingering side effect of my treatment, Avascular Necrosis. This debilitating side effect/disease caused by chemotherapy has damaged many of the major joints in my body and caused me to have a double hip replacement at the age of 20. Struggling with the immense physical and emotional stress of being an acting major and being a cancer survivor with AVN makes me need an outlet that I can come to when nothing else works. This has always been music

I have been playing guitar since I was in kindergarten and writing my own songs since I was in middle school. My guitar has always been like a third arm to me for as long as I can remember. Music is a way I can express myself deeply and completely. It was on a specific day my sophomore year of college when I started writing a song about my inability to relate my existential and physical problems to others when I knew I was onto something very important.

I released my first full-length album, “Aspects of Adjustment,” last month on April 12th. All of the songs on it took me at least two years to complete and center around a particular and personal topic: Transition. Confusing and painful transition. I have found it hard to find art that is about the fallout after the battle with cancer, so that is the story I chose to tell with this album. When I wrote the first lines to the song “Relate”, it opened the doors to all of the songs that came along with it.

But go ahead and try

I’ve been grieving for so long I’m finally realizing

I just can’t explain what’s on my mind

I found with writing those words and putting the right sonic structure underneath them, I was finally able to start saying what I wanted to say for the first time in years. From there, with painstaking reflection, I was able to pour everything I needed out. While not every song on the album is about my experience with cancer, the themes definitely all come back to transition and change. I am in some of the most self-forming years of my life. The first times I have been on my own, the first time I have experienced true loss, the first times I’ve made some really difficult and important decisions for myself and my beliefs. All those issues and experiences are captured on this album, and you might be able to imagine that debilitation’s of cancer in the background has made them even more complicated.

Some of the things that are the most important to me in life are art and more importantly, other people. I consider myself one of the luckiest people on earth to have the support system that I do. Straight from the night I was diagnosed, I had friends and family at the hospital with me within minutes, staying up with me at all hours of the night and helping me with some of the hardest and most shocking experiences I think I’ll ever go through. I know for a fact I wouldn’t be here without my family and friends, as well as the countless doctors and nurses who all literally saved my life. I wrote the lead single on my album, “Another Chance to Breathe,” about all of those people, and it is my favorite song I have ever written. I like to say that I believe people and the love they can show each other are the greatest medicine.

My major hope with this album, as well as with all of my music and art, is that it can help people in some way. No matter who you are. I hope that anyone that hears this album can find some form of meaningful connection and an almost religious release of emotions, like that of the release I know music provides me. Especially for all of the survivors out there. 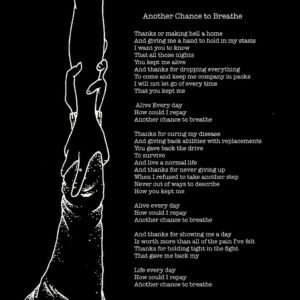 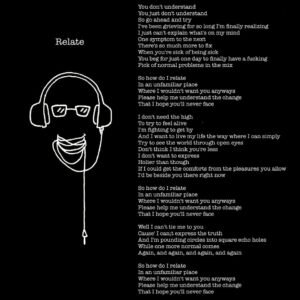