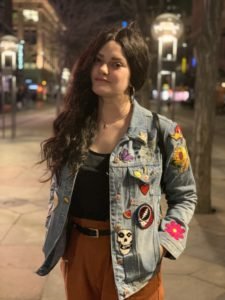 When I think of the word “survivor”, it doesn’t feel like it applies to me.

Although I’ve been in remission for nearly three months, it’s still like, holy shit, I had cancer. I just experienced an epic fight inside of my body to rival the battle scene from the movie 300.

Ringing the bell (at Seidman Cancer Center at University Hospital in Cleveland, OH) and receiving the honorable title of survivor should have made me feel incredibly bad-ass. Instead I was left feeling like a Spartan- outnumbered, unarmored and wearing sandals to a fight. Unprepared for victory.

It’s one thing to accept the diagnosis of cancer as a young adult, but it’s a whole different monster accepting what I went through and will continue to experience during my lifetime.

I feel like I have PTSD (post traumatic stress disorder). I worry at every ache or pain- thinking, “What if I’m sick again?”. Thinking about this battle continuing for any longer is distressing, but sometimes it’s hard to fight those negative thoughts.

Being poisoned for the last seven months has left me reeling with a litany of issues. I am struggling to comprehend what the F just happened to me. Nobody told me about this part.

Everyone made it sound like survivorship was all sunshine and rainbows, but it’s been quite the opposite.

Right after chemo was over, I was immediately excited. I was all, “I’m gonna go climb a mountain and skydive like next month, I’ll feel better by then”. Much to my disappoint, I quickly figured out that treatment is a rite of passage into survivorship- but it doesn’t mean that all of a sudden, the battle is over.

When I list all of the things I can physically and mentally do compared to what I can’t do post-chemo, it’s terribly disappointing. I’m still impossibly exhausted, I sleep for 12+ hours every night which can be really depressing.

My right leg is always numb and as a result, I have trouble walking. My body is all out of whack, I’m either sweating profusely or shivering, or both at the same time. I’m still hair-less.

I feel like someone removed my brain, put it in a blender, shaped into a Jell-O mold brain-looking structure and put it back in my skull. I forget things easily, I’m cloudy and foggy, and I’m often emotionally distressed.

I feel like that toddler in the mall that you feel bad for because his parents have him in a monkey backpack with a leash for a tail. Every time he runs away he’s snapped backwards by the tail-leash. Making progress, then back where he started. One step forward, two steps back.

By the way, when I was a toddler, I was that kid in the mall, constantly trying to explore on my own and run away, much to the upset of my parents and mall security…

In the midst of all this darkness and uphill battle that has been cancer and survivorship, I cannot ignore all of the amazing and wonderful things that have happened since I became a survivor instead of a patient.

I’ve tried my best to see the positive side of the negative experiences that I’ve had the past seven months and when I list the negative things that have happened to me versus the positive things, I quickly realize that the good outweighs the bad- by far.

I learned a lot about myself and I feel a sense of self-assurance that I’ve never had before. I learned who was truly there for me- whether it be family, friend, or acquaintance.

My relationship with my father is stronger than ever, and my mother and I are closer than we were before cancer.

I’m much more confident than I was before cancer. I’m 25 years old, I used to have thick, wavy hair. I was blessed with pleasant features, I have big brown eyes, I’m 5’9 and pretty slender, used to have long eyelashes. I always was confident in my appearance, but I never truly appreciated myself.

Treatment caused me to gain almost thirty pounds, my face was always swollen, I lost all of my hair, and my skin often looked grey or washed-out. Looking like a pudgy, female version of Mr. Clean left me feeling like the ugliest woman in America.

But, feeling this low about my appearance made me appreciate the way I used to look and how I look now so much more. I used to never go anywhere without a hat or wig. I never let anyone other than my medical team, my dad, boyfriend, or roommates see me without something covering my head.

Now it’s like, this is my bald-ass head, I look like an alien but I just beat cancer and I’m beautiful and this is just what I look like now… not forever. I have some battle scars, but I am woman, hear me roar. Ya know? 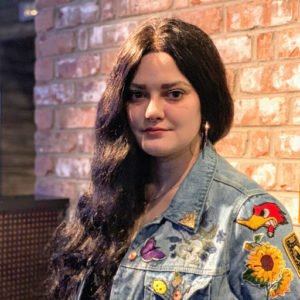 Hannah hanging out at CancerCon

Being a survivor of cancer isn’t all about remission and clean scan results or checking boxes. You can read all of the blogs and pamphlets, you could have the best medical team and support system in the universe, you could be in my position and have a curable cancer.

But beating cancer and reaching remission is like quitting smoking or losing weight. Unless you change your mentality and lifestyle, you’ll struggle- before, during, and after treatment.

Surviving is about acceptance- of the disease, and of yourself. Trust me, I learned the hard way.

People often say, “I’m so sorry for you” or “How do you deal?”. My response? Cancer is the best thing that ever happened to me.

Don’t get me wrong- it scared the living shit out of me. But it taught me more than I could have ever learned in my natural existence… it taught me how to live a wholesome and full life full of love, happiness, and security.

And for that, I will forever be grateful.