Our Bun Her Oven

My husband and I have always known we wanted children. He teaches elementary school, and I’m a children’s counselor. It’s in our blood. So we knew, when I was diagnosed, we would find a way.

Shortly after getting engaged, we moved from Washington state to Oregon so that my husband could get his master’s degree. We had been living there for a few months and were settling in nicely. One night, I decided to take a bath. Rather than stand up to grab my loofah to wash myself, I grabbed a nearby washcloth.

That lazy move may have saved my life.

While washing myself, I found a lump in my left breast. The next day after work I went to a clinic to have it checked and we scheduled a mammogram right there.

A few weeks later, we had the results of a biopsy. Invasive Ductal Carcinoma. Breast Cancer.  My family knew nothing about the BRCA2 gene mutation until my diagnosis. Turns out, my mom and brother have it too, plus my mom’s mom and some other extended family members. None of them ever had cancer, so we never had a reason to get tested.

We decided to get started with the egg retrieval and freezing process right away. I was traveling from Southern Oregon up to Portland multiple times a week and giving myself shots of hormones twice daily. Then, after two weeks of this, the news came…

It was Stage IV.

The cancer I had found in my breast was also in my right hip bone and my liver. We had to stop the hormone treatments right away. Chemo had to start as soon as possible. Our plans for having children were put on hold.

The next two years were full of chemo, radiation, a mastectomy, and drug trials, plus a graduation and planning a wedding.

My twin sister, Danielle, was my maid of honor. The wedding came, and it was the best day of our lives. Without my sister, our wedding would not have been as beautiful (or organized), or gone off as smoothly as it did. We often reflect on that day highlight reel style, with so many happy memories. 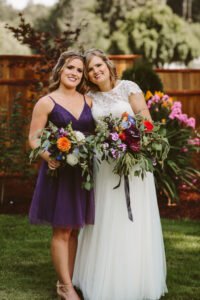 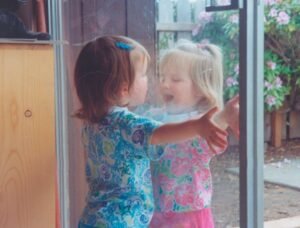 Shortly before the wedding, on the drive home from my oncologist’s office at Seattle Cancer Care Alliance, Danielle told me she wanted to do something for us. I thought, “You’re practically planning our wedding, what more can be done?”.

But there was more. A lot more.

She said that she had been thinking about it for a long time and had done a lot of research (as is her way), and she had decided that she wanted to carry a child for us. She wanted to be our surrogate. More than that, she wanted to donate her egg. We are fraternal twins.

Unlike me, she does not carry the BRCA gene mutation, so there would be no chance of our child having it either. I did not know what to say. My husband and I were shocked. Danielle has always known that she does not want to have children. We never thought we’d see the day where she became pregnant.

It didn’t take long before that day came. 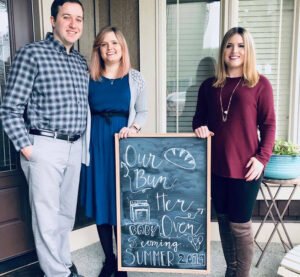 After the wedding, in September, we started the process. The timing was right, my treatment was working, my tumor markers were down. Since we were using her egg, we did not have to do an extraction. It took on the first try.

Finally, after all these years of hardship, something was going right. Danielle was pregnant, our baby was on the way. 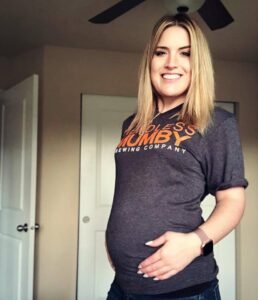 Being pregnant was, let’s just say, not Danielle’s favorite experience.

There were no major complications, but it got quite uncomfortable. It was hard to watch her go through everything she was going through, but we were all reminding ourselves what the end result would be. On the morning after my husband got out of school for the summer, more precisely 12 hours after the school year ended, Danielle went into labor. We drove to the hospital together and, after a few hours of hard labor, our baby boy was born via c-section. He was here!

As it turns out, babies are the best medicine. After our son was born, my tumor markers went down, lower than they’ve been in a very long time. My current treatment, which was supposed to be a placeholder until we settled in to our new routine and could go back to infusions, is working better than we had ever imagined.

A note from Danielle:

“Like Kaila said, I’ve never really been interested in children. Just not my thing. There’s other people in the world who can take on the responsibility for making and growing little humans into big humans. But I’ve always known that this was something my sister was born to do since we were kids ourselves.

Since the day of Kaila’s diagnosis our family joined Team Kaila to fight the fight along side her. When we couldn’t be present for her early appointments with the oncologist in Oregon, my dad and I would listen in on speaker phone. There was one appointment that I remember particularly where the oncologist was telling Kaila that it was no longer safe to continue the process of freezing her eggs and she would have to move forward with treatment as soon as possible. This hit me almost just as hard as the news of her cancer.

Fast forward 12 months. After enduring a rollercoaster of a year I decided I needed to do something more to help. If one worry or doubt could be spared from Kaila, maybe that could make room for more healing.

I came across an article about a sister who had carried a baby for her sister with cancer. After reading their story I let the idea of being a surrogate manifest in my mind. Then one day I told myself I’d do it, and that was that. 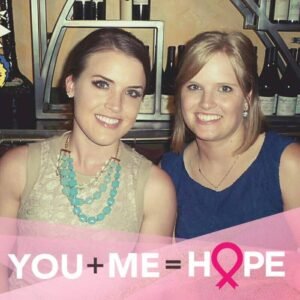 So, what does this all mean to us? It is hard to put it into words. We thought we wouldn’t have this chance. We were considering going through adoption, which we were happy to do but would take a long time and a lot of money we didn’t have, and we didn’t know how my diagnosis would affect the application process.

We are so excited to share this world with our son, where he will learn that through hardship there is strength, community, and a giving spirit. What Danielle did was the kindest thing anyone has ever done for us, or could ever do. We do not know how to thank her, but having the chance to share our story is certainly a place to start.

In her honor, our son’s name is Finn Daniel. 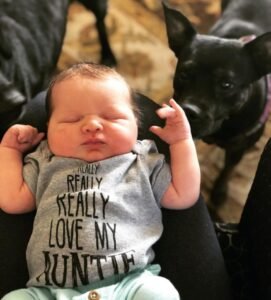