Here is How I Owned Cancer

Here is How I Owned Cancer

December 7th 2017, that’s the date that the tumor was found in my femur. One of several upcoming dates in the months to come filled with experiences I never imagined I would have to endure. Including January 30th 2018, the day I was diagnosed with osteosarcoma.

I also experienced many days and long nights filled with sickness, weakness, and dependence. A whole new unfamiliar version of life awaited me. I even had a reconstructive leg surgery midway through treatments.

So now I have metal rods and magnets in my leg. At the time I didn’t think I would be able to survive it but now I have beaten it! It’s not over until it’s over! No matter what type of cancer others may have, they themselves will attest to dealing with such issues and more. So, it is important to know how to cope with this lifestyle and how to add a positive twist on the entire situation.

When facing this disease expect to undergo some really dark times. There is no way that I would have survived this experience if my supporters and I didn’t remain positive and strong as often as we did. I came to the realization that I had cancer and I was going to have to face it no matter what.

So, I might as well make it as pleasant as possible. Being positive may not be an easy thing to do all the time but it will have such a great impact if mastered. It is okay to fall, just remember to keep getting back up. Staying positive does not mean that you have to be happy all the time. It means that even on hard days you know that there are better ones coming!

I would like to share five strategies I used to help give me a sense of control, piece of mind, and helped reign in my anxiety and depression as much as possible.

It is essential to take time for yourself and wanting alone time is completely acceptable and understandable. However, some situations call for some reinforcement. Social gatherings can be extremely helpful when dealing with this disease; the more support the better.

When I was diagnosed with cancer I planned a wig extravaganza. That way I could prepare for chemo, and hospital life. It was a great experience because I got to ease into my new-found lifestyle. I also wasn’t alone. I was surrounded by people who loved and cared about me. At the party I received many gifts to help me through my journey. Including various wigs, headscarves, hats, bags, and needed items for extended hospital stays during chemotherapy.

It truly lifted my spirits and gave me a sense of control over what I was being forced to deal with. It felt nice to feel somewhat prepared for what was to follow.

Then, when I was informed that my hair would fall out and could as soon as the second chemo, I decided to have a shave party! I booked an event at a hair salon I had been a customer at since I was a young girl. A few close friends and family members gathered with me that day. Some of them even shaved their heads as well. I was the last one to go. It was truly one of the hardest things I had to do.

I shut my eyes and tried to meditate my mind away from what was happening and when I opened my eyes not only was I bald, but many around me were as well. It was nice to not feel like the odd ball out.  I also looked better with the hairstyle then I initially thought I would. We all donated our hair to Wigs for Kids; doing something like that for others having to deal with this horrible illness really made me feel good. The owner of Wigs for Kids even made me a wig that resembled my hair drastically. It was a major life event that I was able to reinvent into a positive light.

Lastly, the AYA (adolescents and young adults) social support group (at Rainbows Babies and Children’s in Cleveland, OH) really helped me out during this journey. I still attend meetings and have made lifelong friends. The meetings can be really great. Talking with others who have dealt with cancer is really helpful. It’s better than I expected!

It can be overwhelming when being introduced to new appliances (wheelchair and crutches) used in your everyday life. New places can also present an overwhelming or uncomfortable factor.

For example, I would spend countless days in the hospital and it would eventually lead to me feeling very trapped, lonely, isolated, and anxious. It was also scary to be a part of a place I had not been before. The medical life intimidated me.

So, I decided to bring a little piece of my known life along with me. I would fill my entire wheelchair with sentimental items. From my clothes, to bedding, lamps, pictures, posters, lights, decorations, accessories, and anything else that gave me a reminder of my life and some of the things that made me happy.

I was first put on crutches when the tumor was found. It was hard to walk with such a large item and made moving around a little more difficult. People stare and sometimes think I needed a lot more assistance then I usually would.

So, I decided I would give them a different reason to stare.

I decorated my crutches with the color purple and even added a pink bag on one to use as a purse. The other side has a pillow pet which adds more comfort to my arm, then I was upgraded to a walker. When I got the walker, my grandmother was able to decorate it with cheetah print duct tape for me! It always gains a lot of positive attention and compliments. I used the same animal print pattern on my wheelchair. 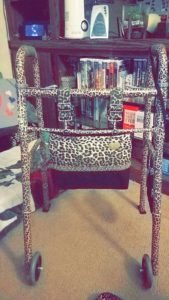 Personalizing my items made me feel better about having to use them. It made them feel more familiar.

On the days I was feeling good and actually had energy I would dress up. When I say dress up I don’t mean put on a ball gown. I mean put effort in what is chosen, flash your personality and your style.

I loved matching my jewelry with my outfits, and also wearing different wigs, headscarves, and hats. It made me feel beautiful and reminded me to love myself. I got to revamp my outfits and try things I hadn’t been given the chance too before. I also got so good at doing different styles when wearing my head wraps or wigs.

During the summer it would be too hot to wear wigs on my head so I wore sunhats. Once I got a mandala henna design instead which is a temporary tattoo. It was so unique!

This helped to restore some of my confidence and made me feel more comfortable.

It can be hard having to spend holidays in the hospital, being away from family traditions and missing out on events. However, they can still be celebrated.

I would decorate my room for each holiday I stayed there. I also made crafts, and signs that related to the current holiday coming up. When I was admitted during Easter I brought my grandmothers breakfast casserole that she only made for breakfast that day every year. My mom and I had it together in the hospital. It was still just as delicious!

Then I was admitted on Halloween. So, I decided to ironically dress up as a nurse and I handed out candy to the actual nurses that were working that night. It’s important to be thankful for the little things. It may not happen exactly as expected but it was nice trying different ways to celebrate.

I was in the hospital on my boyfriend’s birthday as well. So, I invited a few of our friends and family to come to the hospital and we had a small gathering in the playroom where we shared in pizza, ice cream cake, and laughs. I couldn’t go to the party, but I brought the party to me.

I had to learn how to adapt to my surroundings and utilize my options. Even if they weren’t as good as my first choice, I did everything in my power to continue to enjoy life.

I think it is important to remember, but don’t linger in all of the bad times. If there is a time or moment that gives you PTSD or truly messes with you emotionally I suggest releasing it. Any way you can.

During treatment I would release a little bit by writing in a journal but after treatment I decorated another journal that was for writing one positive thing that happened to me each day. It really helps to keep me centered, and keeps my mind straight.

On February 28th 2018, I had my port placement surgery and my very first chemo. It was the worst chemo I had and it resonated with me. So, on February 29th 2019 I went to a park and released sunflowers because it’s the flower for bone cancer.

Try creating your own way of releasing. That way you can try to keep your emotions in check as much as possible. It is also a way to do something good on that day to replace the bad.

Getting diagnosed and dealing with all the things that come with cancer can make it hard to find the positives and good when you have to deal with so much hardcore bad.

But there are ways!

These are just some ways that helped the entire experience be more pleasant then thought to be possible for me.

Cancer is no longer a death sentence.

No matter how much time each of us have left, try to enjoy the ride to the best of your ability.

Instead of feeling owned by cancer try owning the cancer instead! 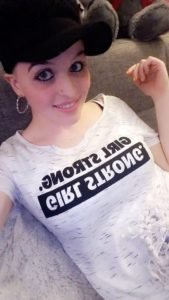